As I’ve mentioned before, I’ve been too distracted with The World to work on complex projects. I’ve been moving towards getting back to speed, though. My heart and fingers started to crave some knitting. I wanted to work on something simple that would keep my interest, and syncronicity (well, actually, Pinterest if truth be told 😉 brought me to this Ribbie scarf. I have some Noro Kureyon, a gift from Natalie (hello Natalie!), which I was sure would work with the pattern if I went up needle size and decreased repeats.

It worked. Not only the pattern, but the simple but varied repeats,  the mesmerizing color changes, and yarn flowing through my fingers. I felt the fog lifting.

This scarf has the Orlando shootings, Jo Cox’s murder, Brexit, the murders of US policemen, the murders of unarmed US civilians, this insane US impending election, oppressive climate change heat, and so much more knitted into it. Overwhelming sadness, heartbreak, fear.

The important thing I realized, though, is that after all of this strife, I’m left with something lovely and warm and creative. By participating in making, I was able to transform these feelings into something I find beautiful and useful.

I can’t help but think of this trying summer when I look at this scarf, but it’s now tempered by the incredible power of making. I don’t think I could ask for more. I still have to block this scarf and weave in the ends when I find the energy, but at least I’m on to a more complex shawl pattern with the remaining Noro from Natalie. It’s helping; it’s helping.

Last week, I had the immense pleasure of seeing a book I made in a show at the Central Branch of the Free Library of Philadelphia.

My Guild did a project where we each took the letterpress printed poem The Farm by Wendell Berry, and did our own interpretive binding.

The poem is amazing and so moving. Once I was able to start working without bursting into tears from the poem, I had a great deal of fun and learned so much with this project. It felt like serendipity — I was racking my brain about what kind of binding  would evoke this wonderful poem about place, nature, integrity,  work, and a way to live a life, and a friend (thank you Kathryn!) sent me a copy of Non-Adhesive Binding by Keith Smith. When it arrived, I opened a page at random, and there was Hedi Kyle’s piano hinge binding done with twigs instead of dowels. My heart skipped a beat, I thought of my collections of dried flowers and branches, and knew exactly what to do.

I’ve also been wanting to try my hand at linocutting and printing, and I thought the cover of the book would give me the nudge to finally give it a whirl. I’m SO glad because I’m in love with the process and want to make a million more! 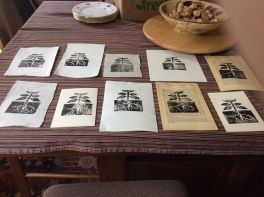 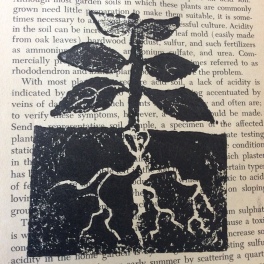 I didn’t go to the opening — I already had plans to go to NYC that weekend, and I only have so much energy for out and about. Although I would have enjoyed being in the company of the other artists, I appreciated quietly seeing the show in a place that I’ve loved my whole life. Me! In an art show! In one of my magical places! It was such a good feeling. 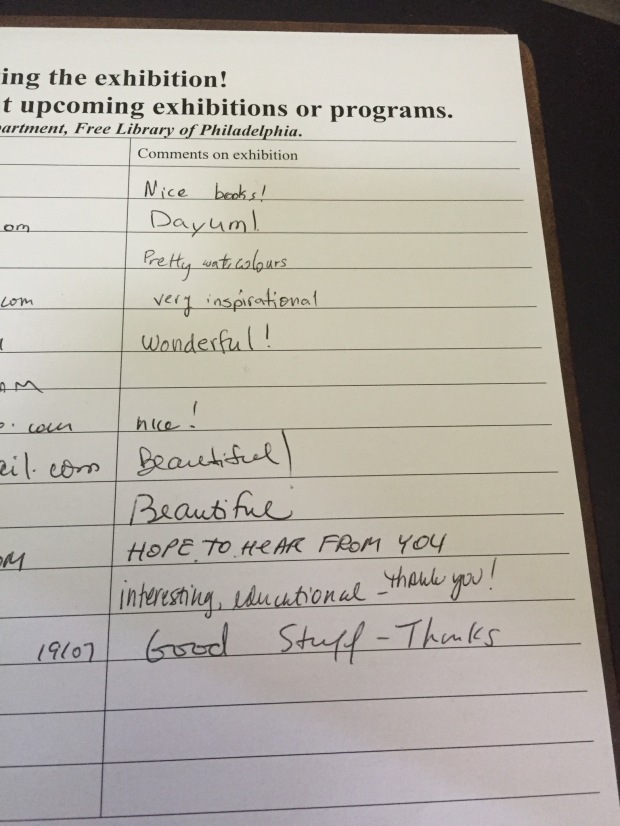 Here’s to many more learning experiences, nudges to try something you’ve always wanted to, and magical places. Clink! 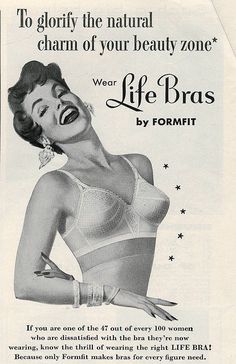 Since last year, really, I’ve been worried about the state of my bras. They were worn to bits — even my newest one was stretched out, filled with runs (!), and overworked. A few months ago, another of my bras had the underwire snap in half at work! That was an uncomfortable afternoon! Another of them had one of the little back hooks fall out which made things not as, ah, secure. And I only own three everyday bras (I also have some non-underwire stretchy things but they really aren’t supportive enough to wear to work, I’ve discovered). Well, two after that underwire snap!

Last week, my husband wanted to listen to guitars at the music store, and I went for the ride to keep him company. I figured there was a bookstore nearby, and I could have some hours wandering the stacks. Then my bra strap kept slipping down because of that missing hook, and I saw a department store. I wasn’t wholly satisfied with my last bra purchase – as you get older, things, ah, shift and change, and you can be a new size. The cups were no longer fitting well, and not really containing the whole, ah, beauty zone as the vintage advertisement euphamises. I had updated my size when I was in my 30s, but not since — I’ll be 47 on Friday! It was time to actually try on bras. Oh dear.

I will spare you the gory details of trying on bras in a little fluorescently-lit box, ominous signs of “this room is being monitored” prominently displayed, wriggling like a fish out of water adjusting the contraption, ooops I said I wouldn’t elaborate. Anyway, my ordeal produced two well-fitting, well-made bras, a new size for me, two new brands for me, on sale for less than half price.

I road-tested them this week and they are comfortable, and look great under clothes. I’m so relieved! I immediately threw out the bra with the missing fastener, but am saving the stretched out one with runs for a rainy day. I would have bought more if not for rationing.

Alas, bras are three coupons, and I only have three coupons. I purchased two bras. This year, at half-way through the challenge, I’m three coupons over budget. It’s regrettable, but necessary. The time was right — I’m pretty much never near a department store with hours to try things on. This was not a frivolous purchase (the frivolous purchases were made afterward at the bookstore to recover from trying on bras!).

Year three of rationing is proving to be difficult. Things are wearing out. I’m thanking my lucky stars I bought that nightgown last month because one of my summer nightgowns completely ripped under both arms last week, right where they were repaired last year! The fabric is so thin it’s not able to be repaired further. I am going to save the bottom fabric for handkerchiefs and cleaning rags — that soft thin cotton will be great for both, but its life as a nightgown has come to an end.

The next six months of rationing should be verrrrrrrrrrry interesting.

The world feels overwhelming currently. I feel like a twitchy, hypersensitive wild rabbit! I am about to run across the field at the smallest provocation and hide in my burrow! Thankfully, I have something in my burrow — I mean home — to help myself ride these feelings out: simple, repetitive stitching.

I usually grab a cross stitch project to work on intermittently when I need soothing. Most years I finish one project, and some years I finish zero projects. Well, this year I’ve already finished one!

I couldn’t help using it as a vehicle to display some of my collection of olde keys, too!

I have 4 days off from work right now, and I am planning nothing more than to do some gardening (dig, dig, dig) and a whole lotta cross stitching — stitch, stitch, stitch — to make this nervous rabbit into a  human being again. Maybe. There is a certain charm to being a wild rabbit!